When I was a kid one of my favorite places to go was Showbiz Pizza. My dad would take there nearly weekly, something fun we would do together or with the family. Now a lot of you may not know about Showbiz, as it was generally a south-eastern thing and it’s heyday was the 80’s and early 90’s in America. I’m sure most of you have heard of Chuck-e-Cheese, which is to Showbiz what McDonald’s Play Place is to Disneyland. Showbiz was a magical experience and everyone I knew had their birthday parties there. The reason for the magic, the metaphysical glue that held this place together was the Rock-afire Explosion.

The Rock-afire Explosion was an animatronic band made up of Billy Bob Brockali, Looney Bird, Duke Larue, Fatz Geronimo, Beach Bear, Mitzi Mozzarella, Rolfe DeWolfe & Earl Schmerle (and the spider, Antioch). Each week they would entertain us kids by singing and cutting up with eachother. Laugh or not, this is the first place I heard the Beatles, the Beach Boys, and many more. There’s a great documentary about The ROck-afire Explosion under the same name, but that isn’t the point here.

The Rock-afire Explosion was the brainchild of one man, Aaron Fechter. Since I saw the documentary, I went on a mission to find Aaron. I was inspired by the fact that after all these years, he retained the rights to his creation long after Chuck-E-Cheese came in and bastardized the franchise, disassembling his beautiful pieces of art and replacing them with a hack band with zero personality. Aaron had kept onto his dream, and had been spending all this time working on other inventions, doing philanthropic work and keeping the Rock-afire alive.

After enough searching, I finally found Aaron and my wife, the Colonel Jon Hensley, Mary Sparr and myself all went down to Orlando to visit Aaron and all of the Rock-afire Explosion. He took us around his magical warehouse, much like Willy Wonka’s factory, stacked to the ceiling with antique electronics, unfinished inventions, old memorabilia and of course, The Rock-afire Explosion, alive in all it’s glory. He welcomed us into his factory, and cooked us the best steak I’ve ever tasted with his experimental Hydrillium. I can’t tell you enough how all of this just made me feel like a child again. It was so inspiring that honestly I kind of changed my view of art and music and everything that day. The importance of holding on to the dream and making sure every corner of the childlike inspiration that creates your greatest aspirations had never been more important. Needless to say, being the way I am, Aaron and I became fast friends and have begun working on some other projects ourself together.

But now to important moment at hand. There’s a bully of sorts in Orlando who hides behind the “Dr. Phillips Charitable Organization”. They basically take money and build skyscrapers and get tax write-offs anywhere they can. They hate Aaron and the Rock-afire Warehouse because it’s the only piece of the block they don’t have, so as you can imagine they don’t stop at anything to try and get Rock-afire to move off their block. Well they won’t! That’s the good news. But Aaron wrote me the other day concerned about this shared wall on the top of the building. Dr. Phillips and Co, want it gone because it’s visible from I-4 and blocks their new skyscraper, but this wall has been part of this side of the skyline for a long time. He was trying to get as many people as they could to write in or call and protest the tearing down of the wall. In the video, he included that it was always a dream to paint the wall with the Rock-afire logo for all of Orlando to see as the drove across the I-4.

An idea hit me that maybe a way we could prevent the wall from being taken down by painting it, or at the very least, let my friend’s life-long dream of having the Rock-afire logo being printed on there happen. I immediately took to Twitter. I know I can rely on my friends and fans on Twitter when I really need something. So I sent out a call for someone to help who knew a graffiti artist in Orlando. My friend on the west coast @NorCalSavage immediately responded with a guy’s info named Dexos. Dexos couldn’t help me but he pointed me to a very talented young man named Sebastian. I told Aaron I’d purchase the paint if he would let this guy come down and paint the wall. (Originally I was going to be there with them but due to my crazy touring schedule I couldn’t make it down). But Sebastian came and began painting the wall.

And some more painting…

After it was all said and done, there it was, from I-4 you could see Fatz, Billy Bob and the logo. I know it was last minute and I know that they are still tearing this wall down. I want to thank everyone who helped, especially Sebastian, @NorCalSavage and Aaron for being such a dreamer. I’m including Aaron’s letter below which he has drafted for everyone, as well as his original video he sent out. If you have it in your heart to still call and let Ken here at D-Fip (The Dr. Phillips Organization), please do, let em know you want the wall to remain up. But most importantly, if you live in Orlando, Fl, go by right now and check this from the I-4! 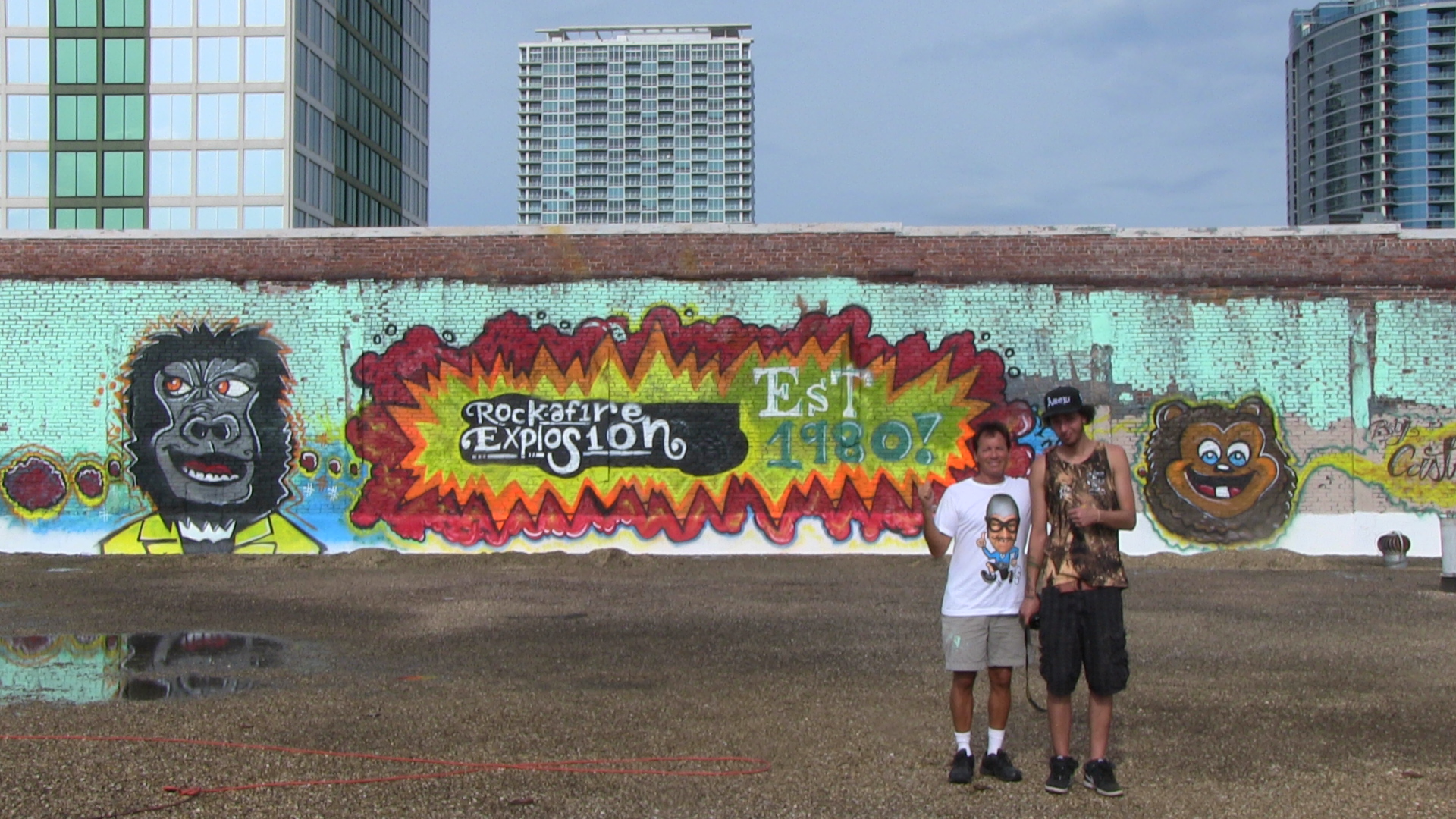 You may have noticed when you take a drive down I-4 that the skyline of
Orlando has changed dramatically and artistically, but for those who
haven’t seen this mural yet, you better look fast, because the City of
Orlando has given permission to the Dr. Phillips organization to tear
down the wall the mural is painted on even though the side of the wall
the mural is painted on is owned by Creative Engineering, Inc.

Back in the 80’s, Creative Engineering’s Aaron Fechter created what is
considered the world’s greatest animatronic rock group in this building
, and millions of children of the 80’s grew up with the Rock-afire, and
some of those kids such as CeeLo Green and Ryan Gosling and Adam Sandler
have paid tribute to the band in their current work. Even the country
music star known to his fans as Shooter Jennings proclaims the influence
these characters have had on him as a major musical influence, even though his
parents are Waylon Jennings and Jessi Colter.

Upon hearing of the plight of this wall, which is being torn down
against Fechter’s wishes and without Fechter being allowed to argue
against its destruction, Shooter decided to make a long time dream of
Fechter come true and to pay tribute to the band that was born here and
had so much influence on his generation. Jennings spearheaded the
effort to paint this wall even if the mural would only stay up for a
day, which, it appears may be just about all the life this mural will be
allowed.

It seems that nothing will save the wall, or the mural short of a
miracle, as Dr. Phillips is moving fast with the blessing of The City of
Orlando, so if you want to see it, you better drive downtown and look
east off of I-4 between Amelia and Anderson Street today.