We here at BCR Los Angeles and BCR Memphis are proud to announce yet another slamming Record Store Day Black Friday with THREE (3) ruling releases coming to a participating record store near you! 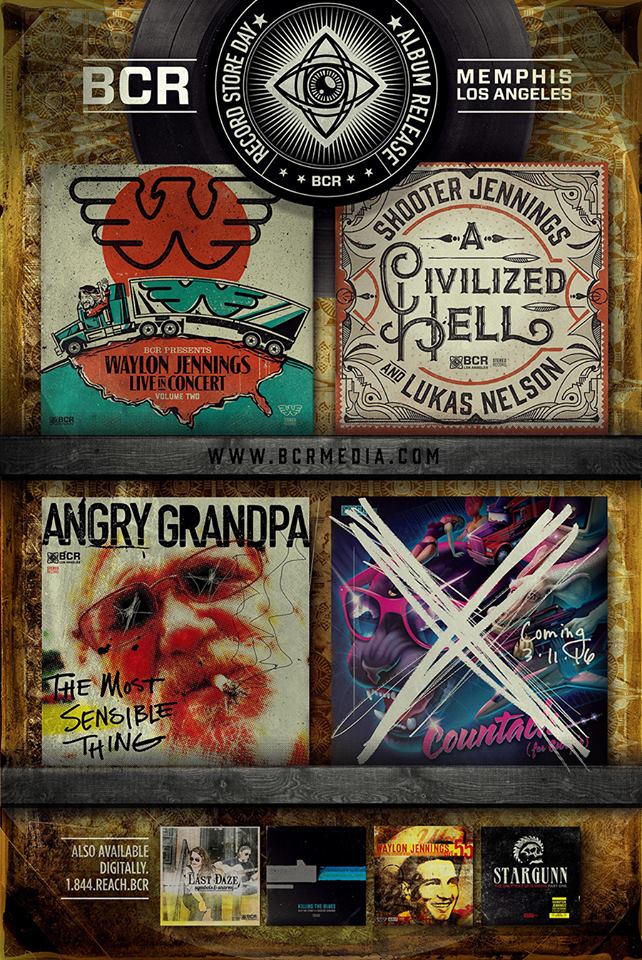 1. Waylon Jennings – Live in Concert Vol. 2 – This is a limited 12″ white vinyl of a never-before-released concert of Waylon and the Waylor’s from the year I was born and in my opinion is the most badass live show I’ve ever heard recorded on my father. This full concert is a must have for any Waylon fan. Only 2000 will be printed, and this will NEVER be available on streaming & mainstream digital services, so this is your once change to get it! (Record Store Day Exclusive)

2. Shooter Jennings Official and Lukas Nelson – A Civilized Hell – Lukas Nelson & myself got together in 2012 and started work on an album. Even though our dads are country legends, we both took our own paths, and came together to do some pretty wicked stuff we are very proud of. We decided to whet your whistle with this white 7″ of two of the tracks for RSD BF. The A side is a ruling song Lukas wrote and the B side is a Velvet Underground cover. Only 1000 will be printed so make sure you pick this one up! (Record Store Day Exclusive)

3. The Angry Grandpa – The Most Sensible Thing – As a lot of you know the late, great Colonel Jon Hensley magically managed to hook me up with the youtube superstar Angry Grandpa last year, and after several pranks, shows and a Sausage Gravy Cookout, I managed to wrangle recording the old man singing his favorite Waylon tune. It’ll surprise you for sure. And the B-Side is a sneak peak into the recording process with the cranky old bastard, and also features the Colonel in a classic moment in time. This one will be available digitally on Black Friday, as well as 200 limited copies of the white 7″ vinyl have been printed.

All 3 releases are dedicated to the loving memory of the Colonel Jon Hensley.

Oh, and I’d like to also announce that my new album ‘Countach (for Giorgio)’ has a release date! It will be released officially, worldwide on March 11th, 2016, and features Steve Young, Brandi Carlile, Richard Garriott & Marilyn Manson, among others! 2016 is gonna rule hard folks!

Covers and poster by the great Neltner Small Batch of course!

– Much love from BCR, your ruling friend, Shooter Jennings

5 comments on “BCR is BACK for Black Friday 2015 / Countach Release Date!”