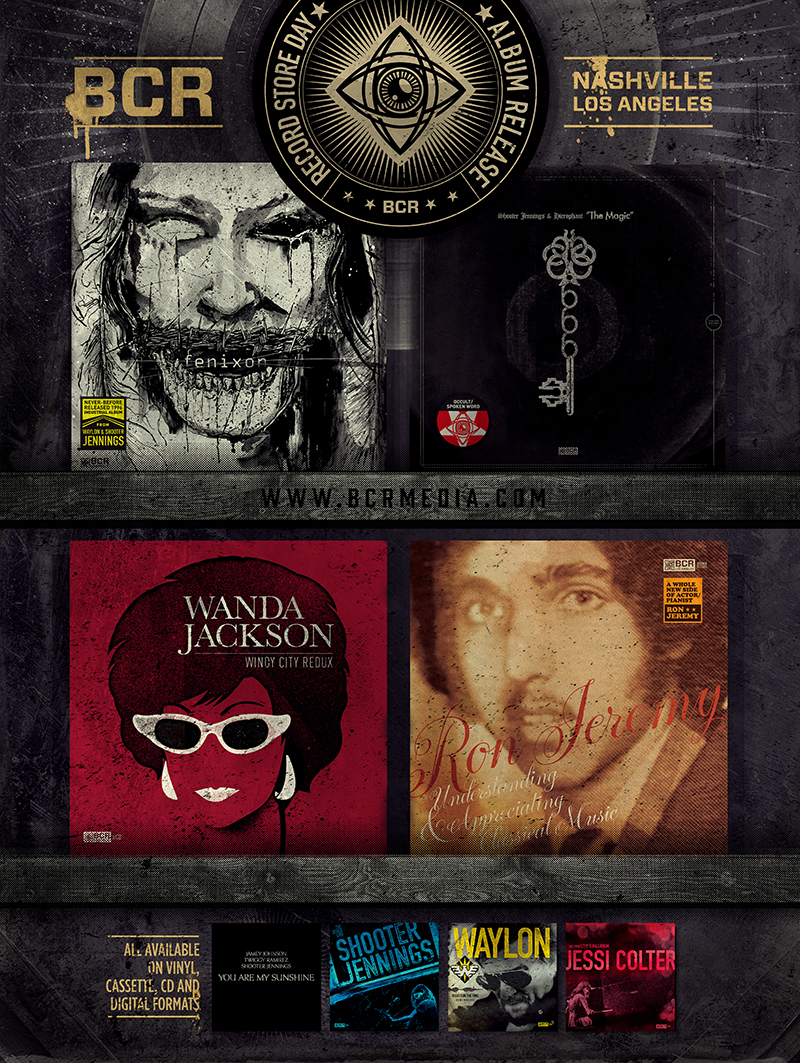 BCR Los Angeles and BCR Nashville are proud to announce our second batch of releases, to be released on April 19th as part of Record Store Day 2014

Waylon Jennings has always been known for his disregard of mainstream pop music and fearlessness when it came to breaking new ground, but with “Fenixon” Waylon’s body of work will receive a brand new facet!  In 1995, Waylon and his then-sixteen-year-old-son Shooter Jennings constructed an album that blended the music and influences of the father, and the modern musical tastes and influences of his son.  Composed mostly by Shooter himself, “Fenixon” includes originals, as well as covers of some of the elder Jennings’ catalog of music, and some unexpected covers as well.  This was the only time the two collaborated together, and for the first time the album will be released in it’s entirety on beautiful white vinyl, with incredible packaging and illustrations by the great Keith Neltner. Listeners be warned: This is an Industrial type album and is not intended for older Waylon fans who may be expecting a country album.  This is the most experimental Waylon ever got in his entire career and showcases his fearlessness previously left unturned. This is a BCR Los Angeles release.

I bet you didn’t realize that actor Ron Jeremy, well known for his work in certain “underground” films, played the harmonica and was a classical trained pianist did you?  This 7″ record finds Ron Jeremy sitting at the piano, discussing and performing classical music as well as mixing in his own sense of humor into the record.  Laced with his own sense of blue humor, this is a journey into the mind of Ron Jeremy and into the history of classical music and it’s influence on modern music.  Printed on beautiful gold vinyl with packaging designed by Keith Neltner.

[BCR0017] The Magic : Shooter Jennings & Hierophant
If you don’t know what “The Magic” is, it is the opening story in the controversial horror collection called “Thirteen”.  The single two-page story got the book banned in Italy for “opening a door that shouldn’t be opened”.  This occult spoken-word 7″ release should only be listened to when you are alone and can focus on it, as it requires much participation from the listener.  Can you make it all the way through?  Can you complete the last step?  Most people cannot.  Released on beautiful transparent vinyl with packaging designed by Keith Neltner.

[BCR0018] Windy City Redux : Wanda Jackson
Two live performances from the Queen of Rock n’ Roll captured at Lincoln Hall in Chicago back in 2011, a month after her Jack White-produced album “The Party Ain’t Over” was released.  These two songs (“Funnel of Love” and “Shakin’ All Over”) were destroyed by Shooter Jennings and feature Wanda’s full band including an elaborate horn section.  Released on beautiful white vinyl with packaging designed by Keith Neltner

4 comments on “BCR is proud to announce 4 MORE releases to be available April 19th as part of Record Store Day 2014!”