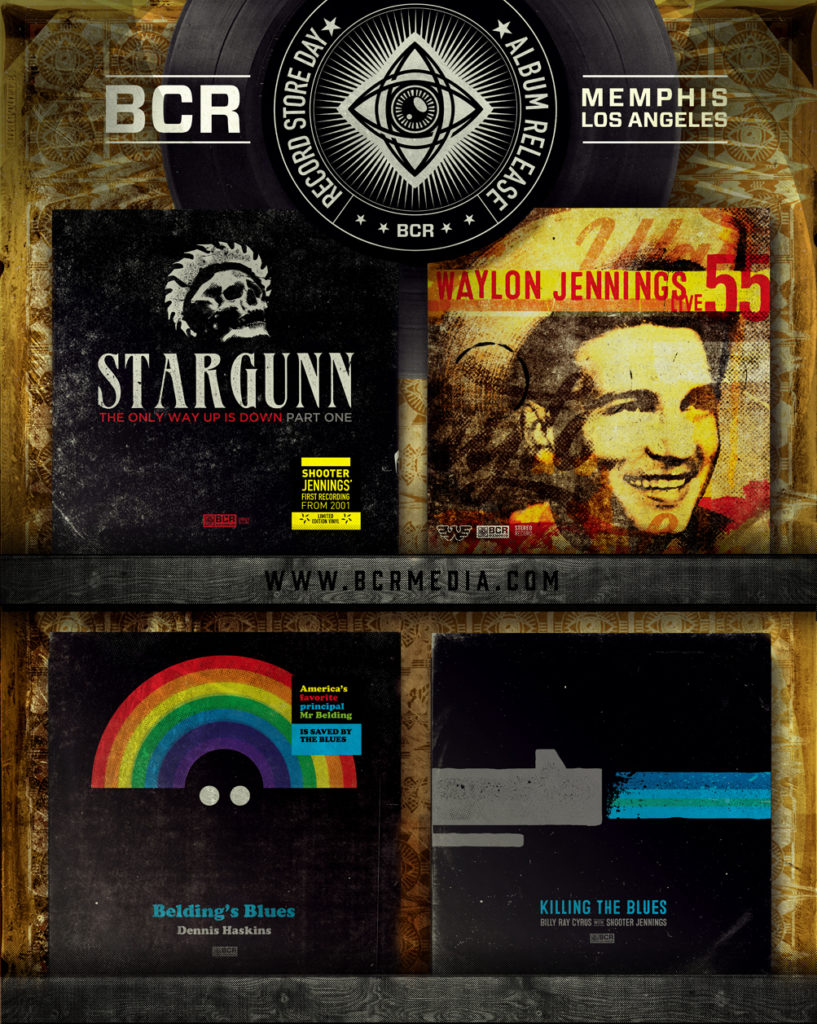 We have made a ton of changes here at BCR in the last few months. First, we decided to move our Nashville operation down to Memphis. That’s right! BCR now has a major presence in Memphis and we are proud to be a part of it. Second, we are pleased to let you know that Shooter’s tribute to Giorgio Moroder will now be a FULL LENGTH album set for release this summer. More details on that coming soon. Third, we have put together (arguably) our finest set of releases to date for the upcoming Record Store Day 2015 which takes place at independent record stores all across the country on April 18th. Waylon’s earliest documented performances from 1955, Billy Ray Cyrus and Shooter Jennings teaming up for an incredible 7″, America’s favorite high school principal Dennis Haskins (Mr. Belding) records two songs for one of our favorite 7″ releases to date, and lastly Stargunn’s very rare first album! Details on all releases below…

Never to do what is expected of him, Shooter Jennings takes yet another creative turn by producing and collaborating with Billy Ray Cyrus on this white 7″ vinyl “Killing The Blues”. The title track & A side features Billy Ray, Shooter and band kicking up the dust and reinventing the Rowland Salley classic with synthesizers, fiddle, banjo and acoustic guitar. The B side, a cover of Waylon Jennings 1978 hit “I’ve Always Been Crazy” features Lee Roy Parnell on slide guitar and sounds more like something you would find on “Derek & The Dominos” than a country standard. After recieving much criticism by the elder Jennings, Waylon and Cyrus met on KDF radio in Nashville in the 90’s and became fast friends. Now many years later the son of the country legend, and his old friend collaborate for a very unexpected
project with a very, unique and psychedelic sound.

In 2000, Shooter Jennings and his band, Stargunn, drove across country from Nashville, TN to Los Angeles chasing a new home for their music. Ironically, their first record was recorded in 2001 in Nashville! “The Only Way Up Is Down” was the only full studio album released by the band, and until now it has been unvailable except for the first 1000 CDs printed by the band. Now BCR Los Angeles is proud to release a limited edition White 12″ Vinyl of the band’s debut album. With new updated art by BCR staff designer, Keith Neltner & Neltner Small Batch, this record is the ultimate collectors item for any Shooter Jennings or Stargunn fan.

In 1955 an 18 year-old Waylon Jennings was a radio DJ at KZZN in his hometown of Littlefield, TX. Waylon often hosted “Guitar Pulls”, or musical events where several local artists traded songs and licks on the air. In a very special instance, one of these Guitar Pulls were recorded on the air to tape, and years later, thanks to Waylon’s family, the recordings have been brought to light. This very special, never-before heard 30 minute long live performance event is the ultimate collectors item for the Waylon Jennings fan. To hear him perform with such grace and confidence at such a young age, in such good quality (restored to it’s best possible quality in the Coil), is something not to be missed! BCR Memphis is proud to release “Waylon 55 Live” as it’s inaugural release on beautiful white 12″ vinyl.

Most people would be most familiar with Dennis Haskins’ work as Mr. Belding on the runaway hit 1990’s television show “Saved By The Bell”, but not many people would know that Haskins’ got his start singing in musicals long before his casting in the teen-dream drama. Having been long time friends with both Shooter Jennings and his manager Jon Hensley, and in the tradition of BCR’s bucking of tradition, BCR Los Angeles is proud to present “Belding’s Blues”. Printed on beautiful white 7″ vinyl, “Belding’s Blues” features experimental music composed and constructed by Shooter Jennings to accompany Haskins’ voice. The stand-out track, a musical mash-up of Tom Jones’ hit “Delilah” and Kris Kristofferson’s “For The Good Times”, titled “For The Good Times, Delilah”, features almost industrial soundscaping that echoes more of Radiohead and My Morning Jacket than it’s original versions. Surely a collectors item for the RSD crowd and the children of the 90’s.

One comment on “Four major titles to be released on Record Store Day!”